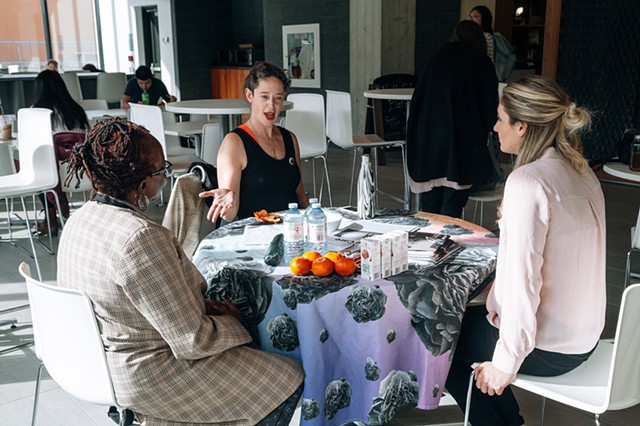 In the choreographed performance Hands become Ears, Guttman explores affective virtuosity* in a series of site-specific encounters. The performance process cultivates techniques of talking, listening, moving, smelling, tasting and touching, in order to probe the space between the performer and audience. The project is conceived in two parts for one audience member at a time.

Through the choreography of cues, landmarks, proximities, detours, arrivals and departures, the performance solicits a somatic response from the audience’s attention, composing modes of intensity and relaxation in turn. In the work, Guttman considers “attention” as the combination of all the bodily senses, a participation of the senses in each other

Part I is a collaboration with invited local seniors, who accompany the audience member on a walk through the campus of UTM. Part I composes the hospitality of two strangers meeting, the rhythms of walking with the exchange of personal narrative, memory, and conversation. The audience member is then dropped off at the door of a private residence, and Part II begins, a silent indoor performance that enhances the subtle tensions and pleasures between guest and host.

Intertwining modes of performance in private and in public sites, Hands become Ears collapses the everyday gesture with choreographed encounter. In doing so, Guttman situates social codes of engagement with unfamiliar circumstances. Hands become Ears asks from its audience a small surrender of autonomy, in order to attune to an ethics and poetics of interdependence.

* affective virtuosity: this is a matter of a criterion of social ecology, which breaks with the idea that care happen because someone loves you and presents it more as an ethical element that mediates every relation source; collective Precarias a la Deriva, Madrid, 2005